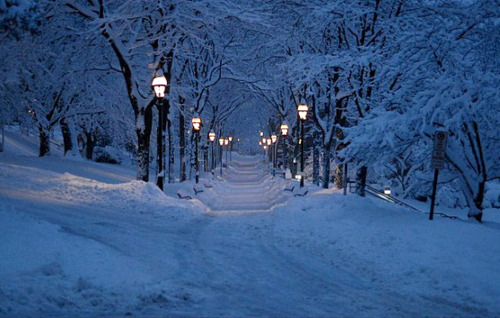 Editor’s Note: Our friend, Jamey Gallagher has been kind enough to share with us an excerpt from his newly released novel “Midwinter.” It’s available for the low price of $2.99 for Kindle at Amazon. With a blizzard about to keep most people home bound from Jersey to Maine, why not shell out the price of a venti at Starbucks and support some great, contemporary American literature?

In the morning it was -3 degrees according to the thermometer mounted near the kitchen window, and the heat had not kicked in yet, so it was fifty four inside. My mother sat on the couch in the living room with one blanket wrapped around her shoulders and a second across her lap, doing a crossword puzzle in a thick book with thin newsprint pages. The dawn shuddered up out of the snow, the sky pink as salmon then lightening to purple and blue. I couldn’t deny that it was beautiful, and I kept looking out the back windows as I drank my coffee and fiddled with my cell phone. It was much too early to text Mae. I was surprised by how much I missed her, a physical feeling that had everything to do with the fact that we were still in the constant-sex phase of our relationship. I wanted to be inside her. I pulled up the last pictures I’d taken with the camera app. Most of them featured Mae in various states of undress, a couple at a party, a few shots of my manager Willie Dean and my evening bartender Tonii Parks. Tonii was a transgender male who wore bowties all the time, and Willie had neck tattoos and played in a psychobilly band on Fridays and Saturdays. There was a shot of the three of us that Mae had taken, hoisting pints and smiling in that sloppy, laughing way that suggested we were much better friends than we were. I’d posted the picture to Instagram where it had garnered a few dozen likes and given an impression that my life was hip and bountiful—which it was.

“Can I borrow some of Dad’s old clothes? I want to take a walk.”

“It’s all in his closet, dear. I haven’t touched it. You help yourself.”

Their room had not changed in the forty two years that I’d been alive, and crossing the threshold was still the world-changing event it had always been. This was a habitat I was not supposed to enter. I could smell my mother’s warm, yeasty sweat, mixed with what I imagined was the desiccation of age, her cells breaking down and off-gassing some essential life. There was still a stack of books on my father’s bedside table, natural histories of northeastern Maine, a book about the extinction of the passenger pigeon, a John Muir book that, judging by the number of slips of paper sticking out of its pages, he had read many times before. The windows looked out at the front yard, the road, and beyond that a mountain vista marred only by the Walker’s house, which spat a strand of gray-black smoke into the air. I sat on the bed. My father had been full of life, his twinkling eyes belying the natural frown of his thick mustache. He had smelled more robust than my mother. I remembered the tang of his sweat on those days when he came in from a many-miles long hike or when he had been splitting wood, the sweat imbricated in the tight weave of his flannel shirts. I had always loved my father, but I got the sense when I was old enough to be his peer that he did not particularly like me, that my lack of interest in what interested him was an affront. He thought I was like everyone else, more concerned with money and material possessions than with understanding our place in various ecosystems or ensuring that our impact on the planet was minimal. I cared—I just didn’t believe that I could do anything about it. I was just one small part of everyone else, and we were all driving ourselves off the cliff. It wasn’t my fault, was how I looked at it. Worrying about it all the time was not going to help anything.

I looked at the paintings hanging on the wall, two of them landscapes painted by my father’s friend Bill Yellin, a gruff, bearded guy who had seemed old even thirty years earlier. I had watched Yellin’s beard turn from black to white over the years and heard him laughing with my father late at night at the kitchen table. The landscapes looked childish, the work of an innocent, possibly stunted, mind, all smears of color. There was a black and white photograph of my father with Martin Litton, during a campaign to save some kind of owls, and another black and white of my mother, taken years ago, in an entirely different world, a glamour shot with her hair elaborately done up. She must have been eighteen, before she had gone to live with the Matses, but in the picture her face possessed a kind of wild confidence. She wore a white cashmere sweater and leaned back on one shoulder. I bet she had never imagined then that she would wind up in an old house in Maine, alone, creeping senescence threatening to take her away. The wallpaper was thick and old fashioned, with a repeating pattern of shapes that resembled but were not fleur-de-lis. I opened my father’s closet and was struck immediately by the smell, which had been contained inside for at least two years, a heady swirling masculine mélange. I took down a brown and maroon checked flannel shirt, a pair of corduroy pants and a warm barn jacket. On the top shelf I found his old fur-lined winter hat with ear flaps, the one that had embarrassed me when I was a teenager, the years when I would go about bareheaded wearing a denim jacket all winter, freezing but refusing to admit it. In boxes at the bottom of the closet I found his thermal shirts, underwear, and wool socks, and I put it all on, feeling like I was dressing up, a little kid in his father’s closet, an impression intensified by the fact that all my father’s clothes were several sizes too big for me. The seat of the thermal underwear sagged, I had to cinch the belt to its very last hole and roll up the sleeves of the shirt, and the floppy hat brim fell to the edges of my eyes, but I was warm and didn’t care, walking down the stairs and outside into a dawn so cold the hairs in my nostrils crinkled.

With every step I broke through the crust of snow, that familiar crumping sound and the feeling of freefall quickly averted. The landscape was familiar, but as I walked I tried to see past what I already knew, tried to see the land the way my father would have seen it. He had walked here every day for the last forty five years of his life without being bored once. There was always something to discover for my father, a small animal’s burrow or… whatever it was that he found. I saw leafless trees in various postures, reminding me of beautiful actresses in horror movies, stills of dames in distress, Jean Harlow, Veronica Lake, and there were the tracks of tiny birds, like messages written in another language. It was tough-going through the thick snow, and after fifteen minutes I was thinking about how hard my heart was working, which led me to think about Todd Groten’s sick heart. Forty three years was a long time for anything to work, but the heart was supposed to work for much longer than that. If I had not been wearing my father’s mittens I would have checked my pulse. I walked around the “pond,” really just some marshy land in the woods that froze during the winter, where I had skated on old chunky black hockey skates when I was a kid, never gracefully, the sound of the hockey stick a reverberating kik that I could still hear. I had skated for hours, sending a puck flying between two branches, imagining I was Bobby Orr. The ice at the edge of the pond was brittle, breaking apart in thin colorless sheets, and in the center of the pond itself were the telltale marks from someone else’s skates, another boy spending time alone under the cold sky. I felt more hopeful than I had in a long time.

It was back in the house after my walk, red faced, out of breath, nostril hairs thawing, snot running over my lips, that I discovered the note in the pocket of my father’s barn jacket, a well-worn note that had been unfolded and refolded countless times, wearing the creases into the paper. The paper itself had taken on the softness of human skin. The message was simple, but cryptic, two words—“miss you”—and two initials. J.N. The words were written in a feminine, even girlish scrawl, the dot over the i a heart. I would not have been more shocked had I discovered nude photographs of another woman in the drawer of his bedside table. The note was intimate and cherished and not from my mother. My mother’s handwriting was more stately, almost mannish, even her shopping lists carefully composed. I wracked my brain trying to figure out who the hell J.N. might be. I couldn’t come up with anyone. A former student? Someone he had met at a conference? A fellow naturalist? Maybe there was nothing untoward about the note, maybe it was innocent, but I felt certain it wasn’t. I folded the note and put it with my things inside my old room. Had he not burned down his study, I would have gone rooting through my father’s old papers to find clues to the mystery, but as it was the mystery felt closed, an impossible possibility that was bound to nag at me for the rest of my life, one of those indications of a deep, unfathomable darkness in the unapproachable pasts of our ancestors.