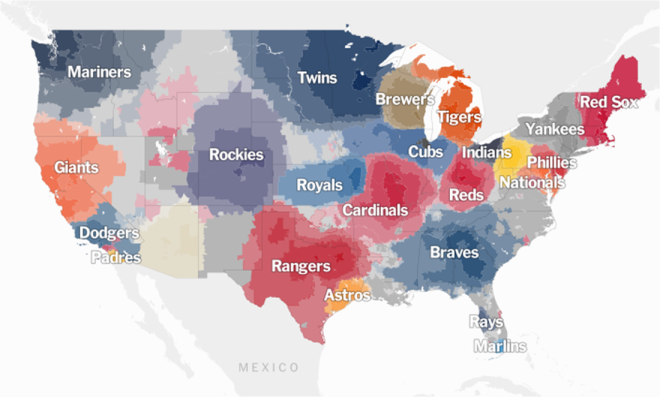 On January 1, Iowa and Stanford faced off in the Rose Bowl. For someone with a sense of the past, that’s right and fitting. The Rose Bowl has long meant BigTen + Pac 8/10/12. It’s been matching teams from the two identifiable regions of Middle West and Pacific Slope for more than a half century, but there is a glitch—teams like Florida State have also been finding their way to Pasadena in recent years.

Those of us interested in the cultural geography of the United States, however, have reason to be uneasy. Neither the Big Ten nor the Pac 12 is what it once was—an athletic conference with a clear regional identity. And they’re pretty well grounded compared to some of the other conferences.

My complaint starts with Penn State, and it has nothing to do with recent scandals. It dates back to 1990, when Penn State—an eastern school—moved to join the Big Ten athletic conference.

Growing in Dayton, Ohio, my sports allegiance was intensely local. I followed Cleveland Browns football (Lou Groza! Jim Brown! Frank Ryan the Ph.D. quarterback!), Cincinnati Reds baseball (that wonderful pennant season of 1961 brought low by Whitey Ford’s arm in the World Series), and Big Ten football. I was a Midwestern kid, and Big Ten meant Middle West, the heartland of farms and factories stretching from Ohio and Michigan to Iowa and Minnesota. They were synonymous. A school from east of the Alleghenies like Penn State didn’t seem to belong.

The same year that Penn State initiated its affiliation with the Big Ten, I published a regional analysis of college athletic conferences in the Journal of American Studies. I took the members of forty extant conferences, from Atlantic Coast to Yankee, and mapped the number of potential intraleague contacts with teams from other states, assuming that each team played each other conference team one time. To no surprise, the strongest pairings were neighboring states like Kansas-Nebraska and Alabama-Mississippi. Mapping the full set of connections produced a map that looked remarkably like our everyday understanding of American regions. There was a West from the Rockies to the Pacific, a South from Texas to Virginia, a Middle West, and a Northeast. To the surprise of nobody familiar with U.S. history, there was also a somewhat ambiguous border zone across the upper South. College athletics nicely reflected and reinforced the nation’s economic and cultural regions as defined by the Census Bureau and by scholar Raymond Gastil in Cultural Regions of the United States (1976).

My scholarly timing was off, given that Penn State’s very high profile conversion to Midwesthood helped to open the way for an avalanche of athletic conference realignments that thumb their nose at geography. The Big Ten now includes Nebraska (OK, that’s right next to Iowa), Maryland (!!), and Rutgers, the State University of New Jersey (!!!). So much for regional identity.

West Virginia has left behind its east coast and/or mountain identity and previous Big East affiliation to play sports on the with the Great Plains schools of the Big Twelve.

Boulder, Colorado now thinks it can see the Pacific Ocean as part of the Pac 12. Austin,Texas flirted briefly with the same geographically curious conclusion.

It is obvious that the proximate cause of the shuffling is the enticements of money and the Bowl Championship Series. The necessary cause, however, is the erosion of distance by twenty-first century technology.

When teams traveled by train or motor bus, it was pure practicality to play relatively close to home. Air travel now puts every college in the Lower 48 within a day’s travel, or much less, of every other, so train schedules and speed limits don’t much matter.

When television had only three broadcast networks with limited sports programming, fans had to rely on local radio and sometimes locally produced TV, with little opportunity to develop familiarity with athletes in distant places. Now a fan can pick from a dozen or a score of college football or basketball games from all over the country on a single Saturday.

Regional rivalries still matter, as football coaches in Ann Arbor and Columbus know, but college football and basketball are increasingly national rather than regional products responding to a national market like other businesses. The future may look like the cobbled-together American Conference that spans from Connecticut to Florida to Ohio to Texas.  Although he was not thinking about the regional identity of college sports, perhaps Karl Marx was right about the constant change of modern life: “All fixed, fast frozen relations . . . are swept away . . .  All that is solid melts into air” (or at least into the airwaves and airport terminals).

Carl Abbott is a professor of urban studies and planning at Portland State University. He is a contributor to the History News Network.