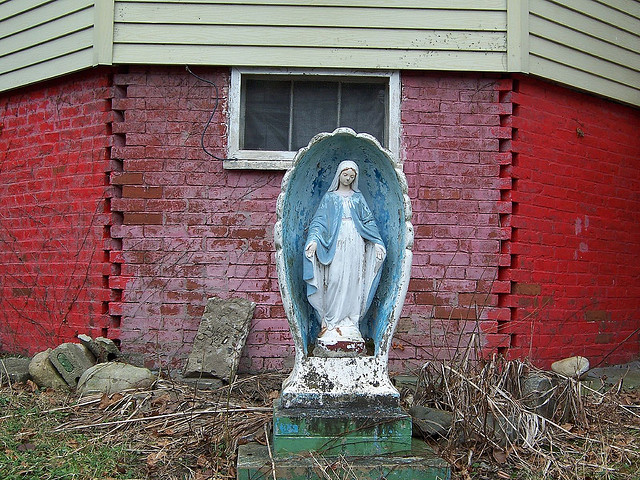 Before Things Get Rough

Why shouldn’t Mary
be the world’s “only smiling Virgin?”
No terrible two’s

no beet-faced bellowing Jesus
dragged flailing from the marketplace
for a nap or a sound smack.

He’s remarkably behaved,
practically a saint. Everyone says so.
“Wait til your Father gets home”

may sound more ominous to Jesus
than to other kids, but His Mom
never has to say it.

She doesn’t badmouth Our Father
for never being around, doesn’t yell
“Do You know what Your Son did today?”

or even a learner’s permit, doesn’t sulk
if He can’t have the reins to the donkey.
You don’t hear an Israelite scream “Jesus

Mary and Joseph!” when a Samaritan
cuts him off and hitches his ass
to the last open post.

Christ doesn’t hang
with too bad a crowd.
Mary doesn’t disapprove
of his girlfriends,
nag Him about grandchildren,
or make His Wife feel like a bad mother.

There are no family squabbles
about where to spend Christmas
or Chanukah.

There’s still plenty to laugh about,
quite a few years to go before
there’s just no talking to Him.

eat, and bowed down to their gods.

It looked like a white mushroom cloud, almost like cotton or smoke you’d see from a fire, kind of billowy.

21,000 pounds of explosives
struck someone as a good idea.
Few people seem to find this strange.

From my father was what Moab
meant. Somehow
it becomes a Massive Ordnance

Air Blast, the Mother Of All Bombs.
What goes into making
something like this?

The daughters of Moab
brought their idols to Israel,
sacrificed another virgin,

piled rocks in a circle
on a limestone hill. Entire histories
become this epigraph of motherhood.

Fertility dances rattle a necklace of skulls.
Kali stomps a sun-blanched bone
mound into the next rebirth.

That’s what little bombs are made of.
That’s how religion becomes execution,
greed becomes prayer, freedom an empty box.

JT Williams is a poet and storyteller. He received his MFA from Old Dominion University and is the author of three chapbooks, faceOff, Bombing The House Of God, and Decked. His poems have appeared in Abbey, Blue Collar Review, Hayden’s Ferry Review, Stray Dog, Thirteen Myna Birds, and other publications. He is also the author of the blog The Nauseating Truth (www.thenauseatingtruth.com) and a lover of tattoos and tshirts.